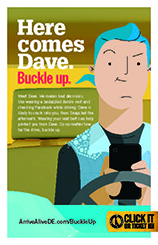 The Delaware Office of Highway Safety (OHS) and police statewide are serious about seat belt safety. Seat belt use in Delaware is at an all-time high of 92.5%, yet still far too many people in our state continue to die as a result of being unrestrained when they are involved in a motor vehicle crash.

Throughout the year OHS funds overtime seat belt enforcement patrols for police departments statewide. Much of the enforcement will occur in the afternoons and evenings when the majority of unrestrained injuries and fatal crashes occur.

Seatbelt Surveys:  Office of Highway Safety staff members and our highway safety supporters conduct annual seatbelt surveys throughout the state of Delaware. The survey shows that our current seatbelt usage rate is 92.5% (compared to the National seat belt rate of 89.6%).

Year Round Seat belt enforcement: Police agencies in Delaware that have been identified as having a high number of unrestrained crashes in their jurisdictions may receive a grant from OHS to conduct additional overtime enforcement of the State's seat belt law for a period of one year. Enforcement is directed toward high crash locations and scheduled during peak times of the year when unrestrained crashes occur.

Media Campaigns: Office of Highway Safety will implement multi-channel paid media campaigns throughout the year that coincide with our enforcement mobilizations.

So, buckle up, no excuses. Click It or Ticket.

More information can be found at: http://www.arrivealivede.com/Buckle-Up