LATCH stands for Lower Anchors and Tethers for CHildren. Beginning in 2002, installing a child safety seat became much easier for many parents. That's because all new child safety seats and all new motor vehicles (except SUV's) made after this date must be equipped with the new LATCH system.

If you have LATCH systems on both your car seat and in your vehicle seat, putting in a child restraint system can literally be a snap! The LATCH system on a child safety seat consists of a tether strap & hook at the top and two more hooks (either on two separate straps or one continuous strap) on either side of the base of the safety seat.

An example of the Lower Anchors and Tethers for Children (LATCH) System is featured in the picture below. The top tether strap attaches to a point behind it. You can also see the lower attachment on the seat hooked to a bar in between the vehicle cushions. 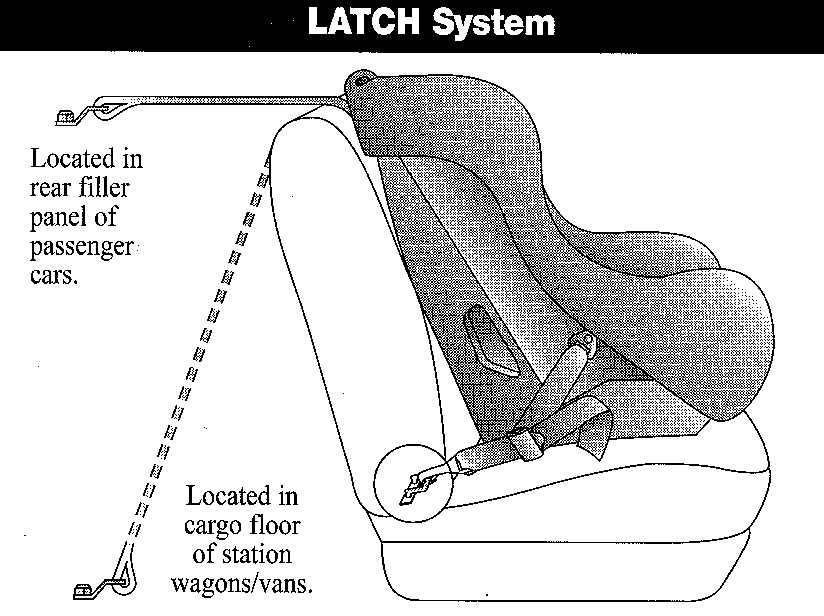 The LATCH system in vehicles consists of three little bars to attach the hooks to. Two of them will be found in the crack (or “bight”) of the back and bottom vehicle seats like in the picture above. The third for the top tether to attach to will be found behind the seat on a rear shelf or panel for 4-door vehicles, or behind the seat in the floor, or attached to the back of the seat frame in mini vans.

To use this system, parents place the child seat in the vehicle seat, connect all the hooks, put your weight on the seat and then pull to tighten.

Some vehicles manufactured within the last couple of years may be able to be retrofitted for LATCH anchors, as may some child safety seats made in the last few years.

If I don't have LATCH in my car but I have it on my child's safety seat, can I still use the safety seat?